Martin Livesey (below) is Financial Director of OSI Electronics UK – a post he’s occupied since January 2016, having worked for other OSI companies in the UK for the previous nine years. 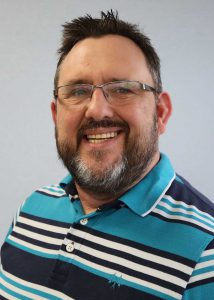 “I got into accountancy and finance because I always liked business and was interested in the way things worked, what generated money – not having money but how it was generated and how businesses ran efficiently,” he said.

In finance you tend to get involved in everything because ultimately it’s going to come out of a bank account.  But I probably spend only a third of my time on traditional finance work – making sure the books are closed each month, reporting’s done and so on.

I spend more of my time talking to other departments and Derek Williams our General Manager, looking at inventory, orders, meeting current and prospective customers, reviewing quotes – over a certain size I sign them off – and discussing customer terms.

I tend to have a different view on things, which is necessary if a company is to progress – having a range of diverse views balances out and leads to good decision making.

The toughest part of my job is balancing risk – we’d all love to get paid up front and not to hold any inventory, but that’s not how it works: it’s a balance of how long we’re prepared to extend terms, or hold inventory for, and agreeing this with customers so everyone is happy.

Like so much here, it’s a team decision – John Harley’s (OSIE UK’s Director Business Development) will receive an enquiry which will go through Derek, the commercial team and myself.

We’ll chat about it – if it’s a good fit for us and the customer, we will see what we can do to fit in with the customer’s needs, even if these differ from our usual terms.

Bearing in mind my job, in its broadest terms, is to make sure OSI does well, it could be although a project starts with us, it would be better for the group as a whole – and the customer – if production, for instance, is switched to one of our Asian facilities.  We would work with the customer to make this transfer smooth.

Although I’ve a finance / accountancy background, I’ve generally been brought in to sort out problems, implement changes or manage specific projects.  I joined OSI Systems (parent of OSI Electronics) in 2006 and initially worked in a company which manufactured anaesthesia machinery and equipment.

A new system was implemented, controls put in place and reporting improved before we transferred manufacturing to the USA and merged the operation with OSI’s other healthcare companies within the Spacelabs division.

My stint there and with other OSI companies included various positions before I joined the OSI Electronics division in 2016. We had just acquired Union Four Electronics, having already bought Briton EMS back in 2013.  We brought these two companies together in 2017 to form OSI Electronics (UK) Ltd.

While profit is important, and without a shadow of doubt profit has to be made, it is a kind of secondary measure – if the company is not performing well and not doing the right things, profit won’t be there anyway.

Profit, cash flow and customer order book are all critical, but the operation has to run smoothly, we have to make sure we’re treating customers fairly and providing a good service in order to retain them.

Balancing all those things can be difficult, but to make money you have to invest and scrutinise where and how – is there something we need for a particular contract?  Does it add value?  What if a customer wants a job quickly but doing so will incur overtime and our suppliers may charge a premium for a fast turn – will the customer be prepared to cover these additional costs?  If they are, fair enough.

But if a customer needs to delay products which are ready to ship, or are unable to pay an invoice which is due, they should feel they can pick up the phone and talk it through with Derek, John or myself.  If they are open and honest with us, then if we can help, we will.

We normally have a manufacturing supply agreement with our customers, usually giving us more flexibility by underwriting parts which might be difficult to obtain, or get better value by buying larger quantities where we can schedule the deliveries over a longer period.

It’s always good to work with customers so we can achieve these things together rather than simply asking for a purchase order.

Although we have a standard template for an MSA, drawn up by our legal department, each one is reviewed, discussed with the customer, refined and tailored – there are nearly always clauses added, modified or rejected.  Ultimately it’s an agreement everyone should be happy with and sign, which, of course, we will adhere to.

Brexit has had a big effect on many of our customers.  It feels to me there’s not a lot of confidence in the market generally to commit to large orders – if they’re not getting sales, they are not going to need the product made.

I think it’s the uncertainty around Brexit which is the real issue – and now there’s to be a UK general election on 12th December, we have even longer to wait before Brexit is sorted.  Uncertainty is never good for any business.

A good percentage of our time has been spent on Brexit – Iain Taylor, our Purchasing Manager, has been talking to suppliers about their plans to see if they are stockpiling and John has been asking customers if they want to pre-order.

One of the good points of being part of to the OSI group is we have electronics manufacturing facilities in Singapore, Malaysia, Indonesia, USA, Mexico and Canada giving us the option to transfer our supply chain to a different country if things turn out really badly.  A lot of our UK only competitors won’t have this ability.

OSI brought our working capital when they purchased us and we manage our capital accordingly.  We make sure we collect our money on a timely basis and pay our suppliers regularly – we don’t like to drift on that one.

OSI Systems as a whole has very low gearing, which gives it – and us – the opportunity to invest while minimising risk.  We don’t have any borrowings in the UK – we’re self-funding.

Managing our budgets is down to good timing.  We generally close our books within a couple of days of the end of the month – if everything is in-line with expectations, by the end of the second day I’ll have the data to know how the month went.

Capital purchases are authorised by the finance department at our corporate HQ in the States.  It’s as you would expect – for instance, when we bought our new x-ray unit in 2017, which cost £140,000, we put a business case together, justified it, put a request in and had it approved.  Quite a structure, but it works.

The US tends to think short term quarterly whereas on the whole the UK looks at 12 to 24 months, making the numbers a bit of a balancing act.

It’s very easy to make a judgement from a number, but understanding what’s behind the numbers is also very important.  I’ll therefore talk to Joe Clayton, Engineering Manager, and Liam Dixon, Production Manager, about the value of a particular number and its importance.

So if I find we didn’t forecast enough and we’re going to incur extra costs, I need to revise my management forecasts accordingly.  If we’ve overspent somewhere, we need to understand why and take a view on it.

Sometimes it’s good news and the numbers are better than expected, which also needs to be explained and reflected in my management reports.

But we have to make sure we’re looking after our costs and working within our means as that protects everyone’s jobs and safeguards the company’s future.

I try to pick up ideas from people I’ve worked with which I can incorporate in the way I work.  It might be, say, something particularly clever on the systems side, such as an idea Joe had for our quotes spreadsheet – using a graduated fill on cells to show its value to the whole quote, an idea I hadn’t seen before.

Even though I’m pretty good with Excel, there are probably half a dozen people I’ve worked with who’ve done something really clever with Excel which I’ve not seen before and has given me the next level of achievement to aim for.

I like to keep on top of industry news by talking to Derek and John, checking customer websites, what’s changing from government and news alerts about Brexit.  There are always some interesting challenges in front of us.

And let’s not forget we provide a manufacturing service while OEMs sell a product, so we have to be very reactive to our customers and the challenges, internally and externally, this can lead to.

A couple of years ago when the electric car market began to take off, the car manufacturers and their suppliers bought a lot of the world’s electronic components.  We had to adjust our purchasing strategy accordingly.

Thankfully the worst is now behind us and the component market has stabilised, but at the time it was a big challenge, where, fortunately, we were able to use the buying power of the OSI group of companies to good effect.

But challenges like that are very interesting as they exposure us to a lot of different businesses and the way they are run.

We’ve built a great management team over the last 18 months and we all get on well with people.

Even with the amount of change we’ve gone through over the last three years, we’ve got good morale and a good atmosphere within the company.  I enjoy it.”