Derek Williams (below) has been promoted to the role of General Manager of OSI Electronics UK with immediate effect. 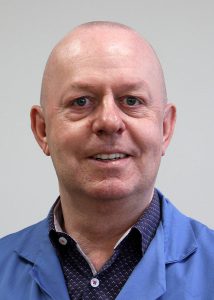 Derek joined the company in December 2017 as Head of Operations.  He replaced Mark Fox, who retired a few weeks ago – Mark was a founding director of Union Four Electronics, which, along with Briton EMS, formed the core of the OSIE UK operation when the companies were merged last year.

“In his tenure with us, Derek has been a dedicated employee and has contributed to significant improvement in our UK operations,” said Shawn Thompson, President OSI Electronics Inc.

“As we continue to grow the OSI Electronics business in the UK, Europe and the Middle East, he will be vital to supporting and leading our on-going initiatives.”

Derek, who has an MBA in business administration and is Black Belt Lean 6 Sigma trained, has held senior operational posts in contract electronics manufacturing companies in the UK and Europe since 2002.

“I was tasked with reshaping the manufacturing operation here in St Neots by improving efficiency through new equipment, along with training, developing existing staff and recruiting industry experts to join our team,” said Derek.

“This has been achieved – our new production facility has increased our floor area from 35,000 to 55,000 ft² (3,250 to 5,100 m²), we have invested in more equipment, including a new Quadra 5 x-ray inspection unit, and our management team has been bolstered by new key people joining us in production, supply chain, engineering and quality management.

“We are ambitious to grow our UK operation to new levels as we continue to win significant business from large OEMs – now we have the tools to do the job.”