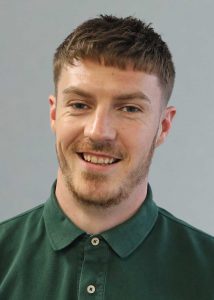 Liam begun his career at Briton EMS (the precursor to OSIE UK) as an apprentice in 2011, where he took the opportunity to gain an HNC (Higher National Certificate) in electronic engineering through the UK’s higher education day release scheme.

“Coming up from the shop floor means I know the people and how the business works,” he said.  “During the merger with Union Four Electronics in 2016, I was flying the flag for Briton, working well alongside Richard Shakeshaft, Union Four’s Manufacturing Manager, as we pooled our resources.

“During the last two years, I’ve been exposed to higher management responsibilities, reporting to our American owners and involved in projects which are influencing our key performance indicators.”

The Production Manager role is not for the faint-hearted.  It covers managing the PCB and box build lines and the inspection and test teams, controlling assembly schedules to meet delivery deadlines, ensuring materials and components are available when required and, crucially, product quality is never allowed to slip.

“There’s still a learning curve, of course,” he said, “but one of the values of a good apprenticeship is working in lots of departments and with lots of different people – for instance, in production engineering I was exposed to the fundamentals of how we manufacture electronic products, so I know what resources are needed and the skill bases required to get the right people to do the right job.

“My biggest challenge is moving from actioning a request from senior management to being part of that very team making decisions to change how we work.

“My predecessor rightly put a lot of effort into upskilling our production supervisors as we move to better process control and a far greater focus on our customer base.

“To evolve and grow on those foundations, I’m bringing the supervisors up with me, working with Jackie Jacklin, our Production Planner, to set the plans so my supervisors can give the shop floor clear instructions – and deal with 80 per cent of day-to-day issues to free me up for the 20 per cent which need my attention.

“One of my aims over the next few months is to grow the processes and the people, but de-skill and delegate tasks and make the system work for us.”

“We have some really good staff here who are ambitious – and I want them to be ambitious. As our business grows, as we make more of our facilities and our two factory units, we will need more people who can manage production – it’s great we have so many people internally who have the potential to move into this role.”

Liam is known for his positive, can-do attitude, for rolling up his sleeves, staying late and ‘mucking in on the shop floor when needs must’.

“This has earned me a lot of respect from colleagues and the people who work for me,” he said. “It also means they’ll help out because they know it’s important for the business.

“I work methodically and logically, so with my academic education and the continuous training courses I’m doing, I’m a half-way house between the old school drive to get the work done and new school ideas to move our processes forward by working smarter, not harder, and grow the company with the current head count.”

“We’re continuing to push towards lean manufacturing and Six Sigma, as is already practised in other OSI factories,” he said.  “The new factory unit we opened last year has already given our customers the opportunity to re-engineer their products to take advantage of the flow line stations we’re installing.

“I want to do more of this – to be a fresh pair of eyes looking at how we can re-engineer and re-work something we’ve always done one way to give us more time, resource and capacity to take on much more new business.

“We have a great manufacturing resource in the UK covering all bases.  It’s a direct result of amalgamating Union Four, which was very strong on PCB assembly, and Briton EMS which had in-depth test department and test solutions for customers and did a lot more box build and mechanical stuff.  It has made a happy marriage of experiences and ideas.

“But all this is meaningless if we don’t produce quality products, to spec and delivered on time. Every aspect of the trust our customers place in us matters hugely – and now it’s my responsibility to see we meet those criteria.”

Liam Dixon leads a team of five supervisors and 66 production staff at our St Neots HQ. He reports to Derek Williams, the General Manager at OSI Electronics UK.