Peter Filtness (below), Senior Buyer at OSI Electronics UK, worked for RS Components for just short of 21 years, predominately involved in procurement ‘of one sort or another’ – initially test and measurement equipment, then health and safety equipment and for the last six or seven years electronic componentry. 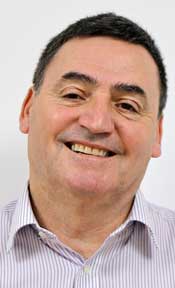 Back in 1978, Peter was a buyer for Canada Dry soft drinks – initially responsible for packaging materials ultimately involved for purchasing the raw materials from which the drinks were made.

In 1986 he switched to heading up the purchasing team of a hosiery company in Leicester, like Canada Dry a production company, with responsibility for the procurement of everything – energy, raw materials, packaging, even stationery.

At RS, Peter’s role was buying stock for sale (rather than production, as at OSIE UK) and while the quantities being purchased were routinely far larger than for a CEM / EMS organisation, there are surprising similarities.

“People like OSI wanting large quantities will, for preference, want to buy direct from the component manufacturers – just as I was doing for RS.

“Now the component suppliers are swamped with orders from the big consumer electronics companies and the automotive industry, they are ‘getting fussy’ about who they deal with further down the chain,” says Peter.

One of the attractions for Peter of coming to OSI Electronics is the overall size of the parent group (near $1 bn sales in the last financial year) and the establishment of a global buying team from which OSI in the UK will benefit.

“Quantity drives everything and, fortunately, we are still able to buy many of our components direct because our business is attractive – but where it isn’t, we rely on distributors.

“This is where buying experience and good contacts come to the fore – I know all the best distributors and I can brief four or five of them and buy on the best price knowing quality and delivery will be good, although when I know they can do better, I’ll ask for a sharper price.”

It’s all about honesty and service

Having worked in a production environment, Peter is familiar with the pressures that brings, with customers changing their minds and production schedules being altered.

“Customers are what they are and we’ll never change them.  They’re driven by their customers, so it goes all the way down the chain.  For me, the key is to have a good communication process and making sure everyone understands what is required and when, and being upfront and honest and saying we can – or can’t – keep our promise.

“I’ve always found it’s better to be honest with bad news and give the reasons rather than delay until the order is due.  I get infuriated if I place an order with somebody and it’s only after delivery was due am I told there will be a delay.

“Yes, in the real world these situations arise:  I’ve found people are more receptive to being told in advance it’s not going to happen when there’s still time to plan alternatives.”

“There are times when I have to tell sales there is a problem and there will be times when customers are telling sales they need their product earlier than expected.

“It’s how we all react to those situations which matters; the best way is to communicate to keep on top of those demands – make sure we’re all talking to each other and understanding the priorities.

“It is all about service – quality is a given, manufacturing capability is a given and prices are a given.  So where do you stand or fall as a business?

“Service – it’s the be-all and end-all of what we can do because we’re a people-to-people business.”